It has been forever since I posted an update. A lot has happened since then and I'm sure I'll forget lots of things. As I am writing this we are snowed in at my parents house. We came over here Sunday afternoon so we would beat the worse of the snow and wind. We came here because they are gone and Tyler is in charge of the hogs/barns since Dad isn't here. If something were to go wrong and Tyler couldn't get here because of the roads it wouldn't be good. So we packed our clothes and headed over :) Blake is enjoying being here and playing with all of his toys over here. I am doing several crafts and just being lazy, I have done our dishes and done some laundry though :) Tyler was in the hog barn all morning doing chores and making sure everything is staying as warm as it can. With it being -12 outside with a -40 windchill he can't do anything outside so he is working in the heated shop now. 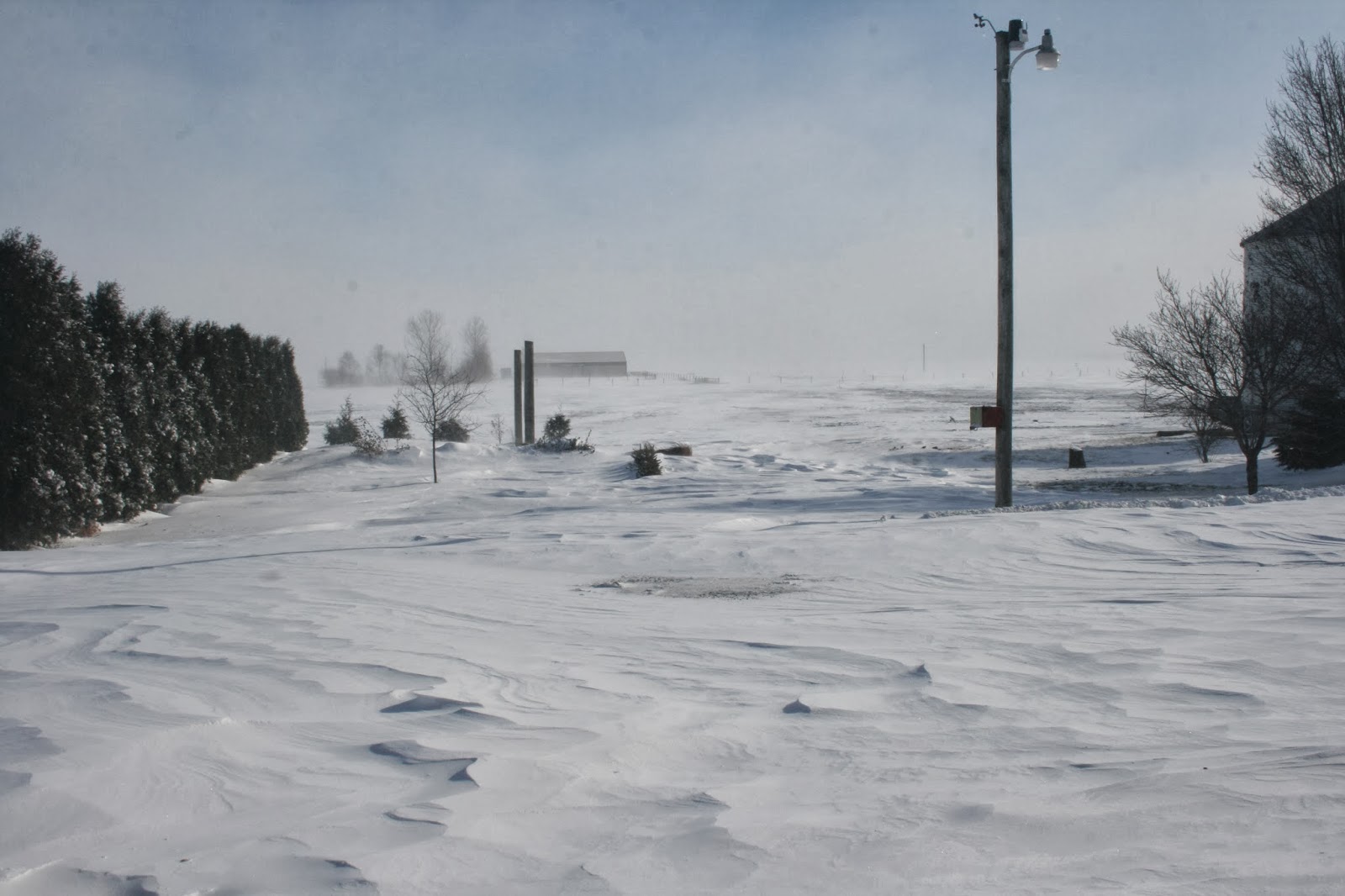 Here is a picture at my parents. I am standing on the porch, this doesn't show much of the snow, but I wasn't going to walk around too much :) I think this is the only day that it felt warm to go in a walk in freezer to get something for lunch :)

My brother and sister-in-law are in Jamaica for a week on a work trip. I think they picked a great time to be someplace warm!! So we are dog sitting there puppy Maggie for them. Blake is loving having a puppy around all the time. Although he likes snuggling a little more than she does :) He likes to lay on her if she allows him to, which isn't often, but he does every once in a while. 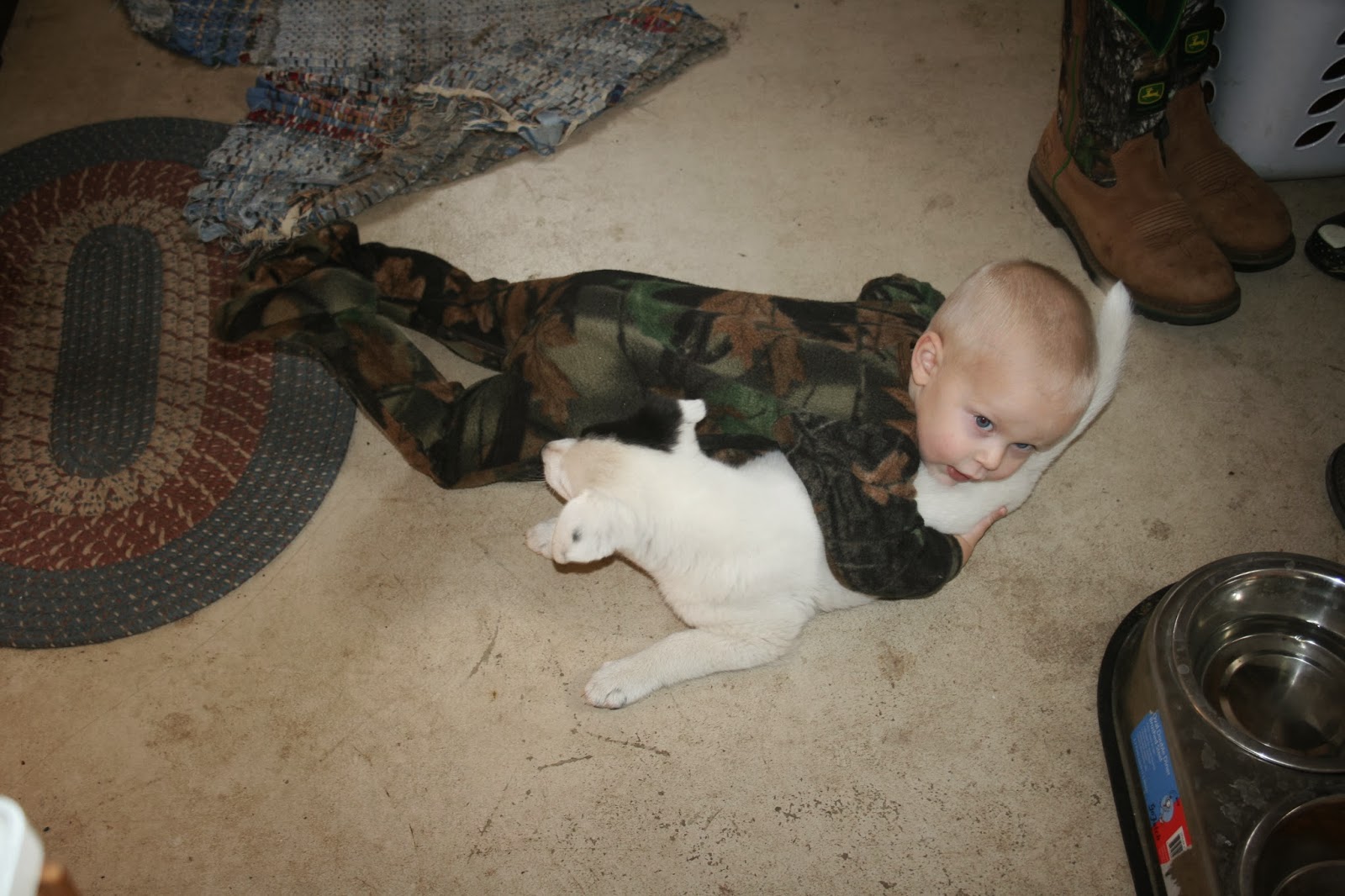 Since I am not at our house I don't have our old camera that has most of our pictures on it. And I say old because we got a new one! Well new to us anyways :) My parents got a new camera so we got there old one!! I was super excited! It is my dream camera to have, so I was sure to bring it along to document all this snow :) The old one probably won't get used much. So there won't be many pictures on this update.

My family had our 2nd annual butchering day on New Years Day again. I wasn't there for all of it, we had a little boy with a double ear infection, so we left a little early. But we butchered 2 hogs and 2 deer this year. It was quite a bit more from the 1 deer and 1 hog we did last year :) Tyler has gotten 2 deer this year. He got a little button buck, which counted as anterless in archery season, then he got a doe with his muzzeloader later in the season. So we butchered his doe. The button buck we made mostly into deer jerky. My dad also got a small doe the Sunday before we butchered so that was the other deer we did. Since we planned on doing this since last year it was a little more thought out than the first butchering we did. We did summer sausage, snack sticks, brats and ground meat this year. 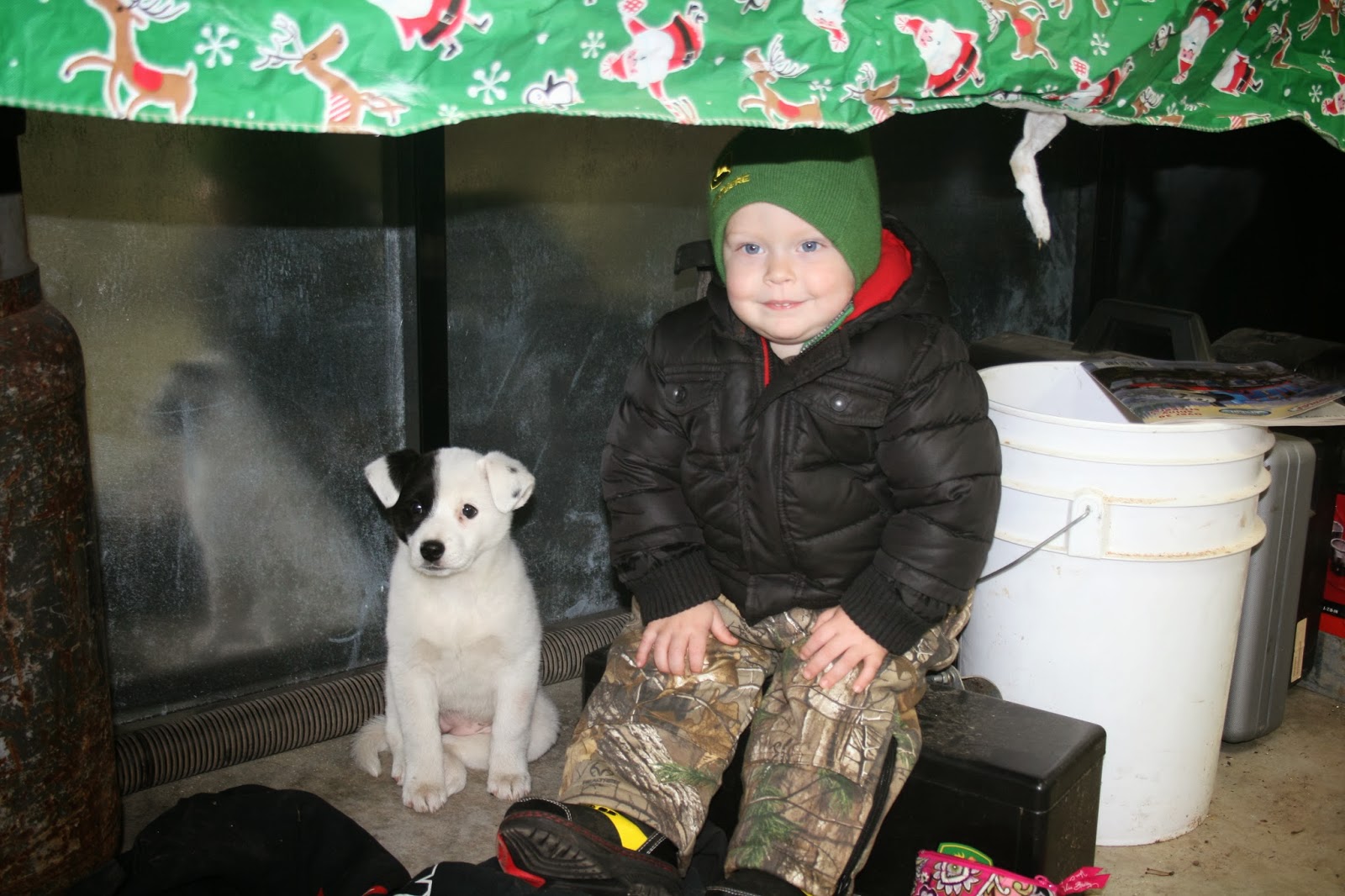 Blake and Maggie's spot for the day- under the work bench. 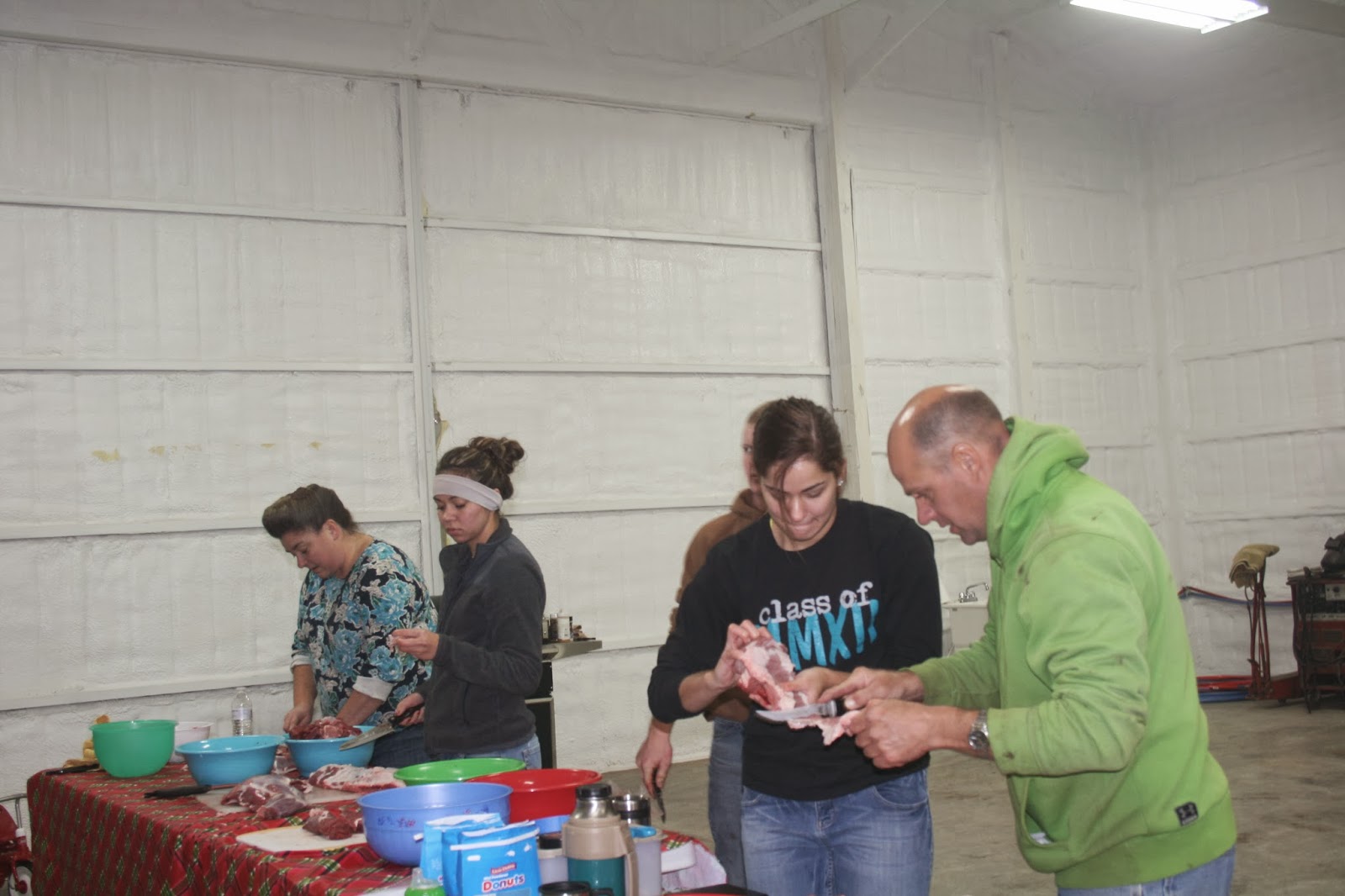 Mom, Angie, Laura and Dad getting started for the day. 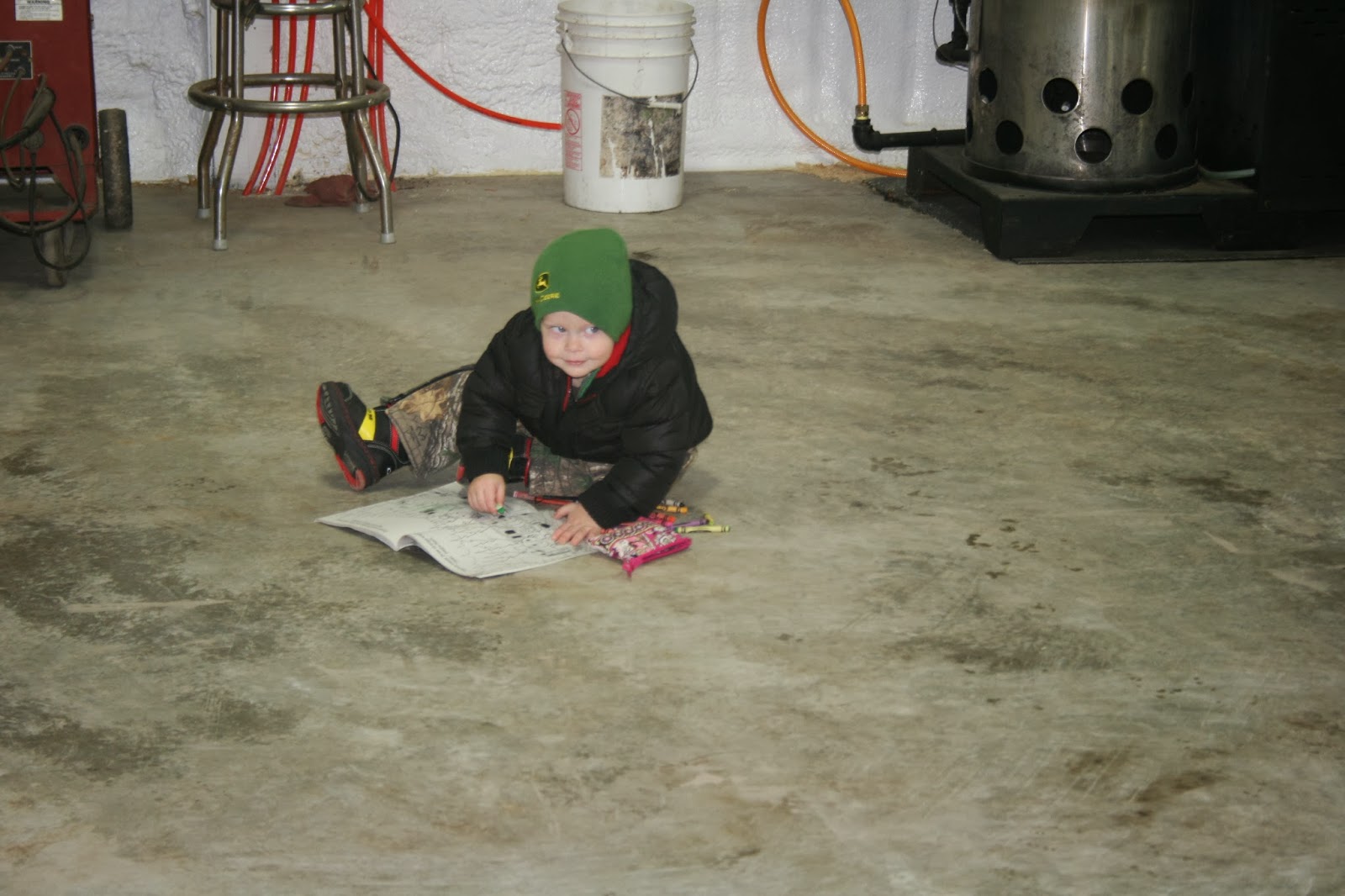 Blake brought along a Thomas coloring book so he colored some, and let the woo wa (his word for dog) color in his book :) 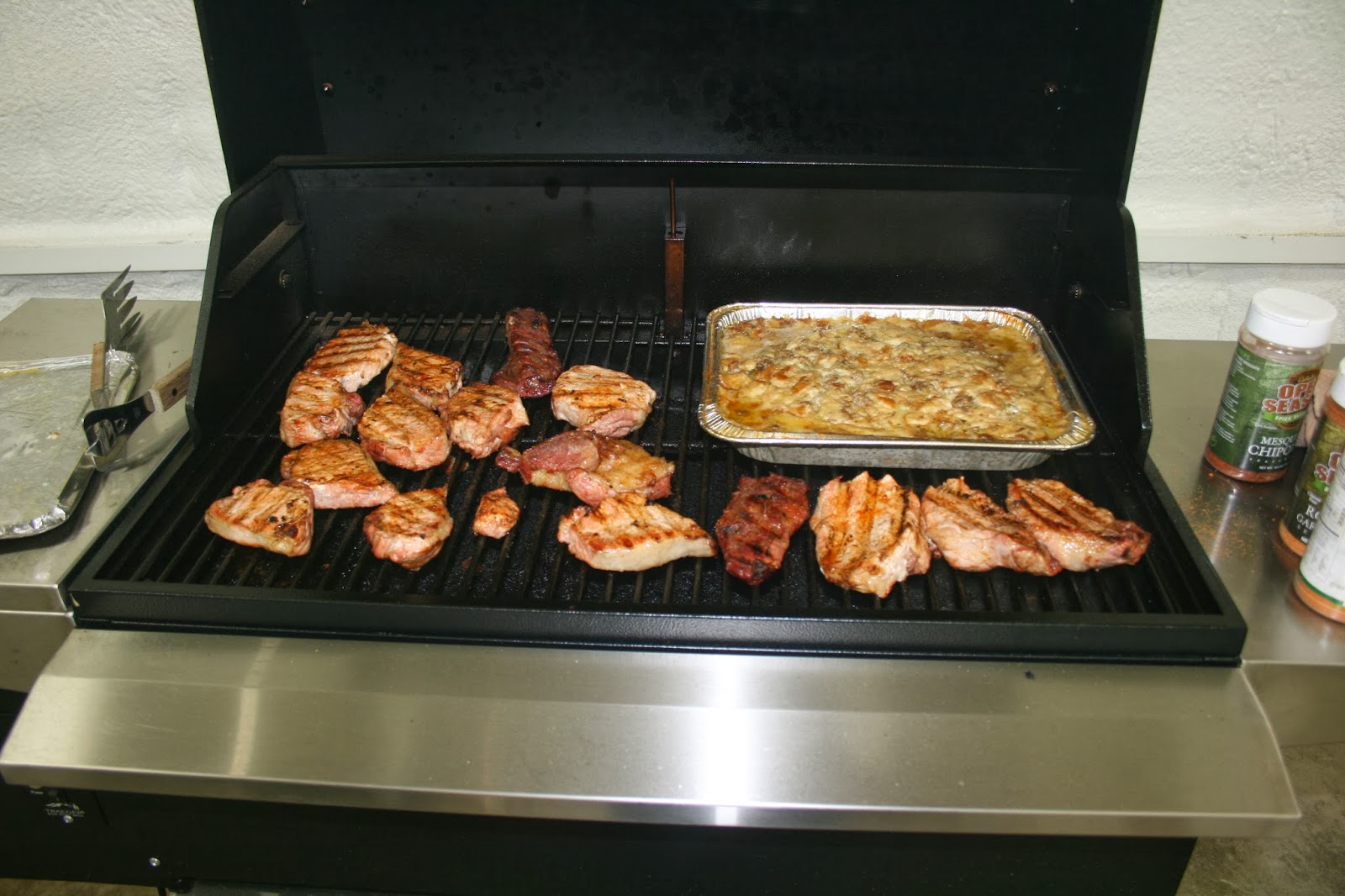 Lunch!! The freshest pork loin you'll ever eat! It was delicious! Along with some deer steaks and dressing. 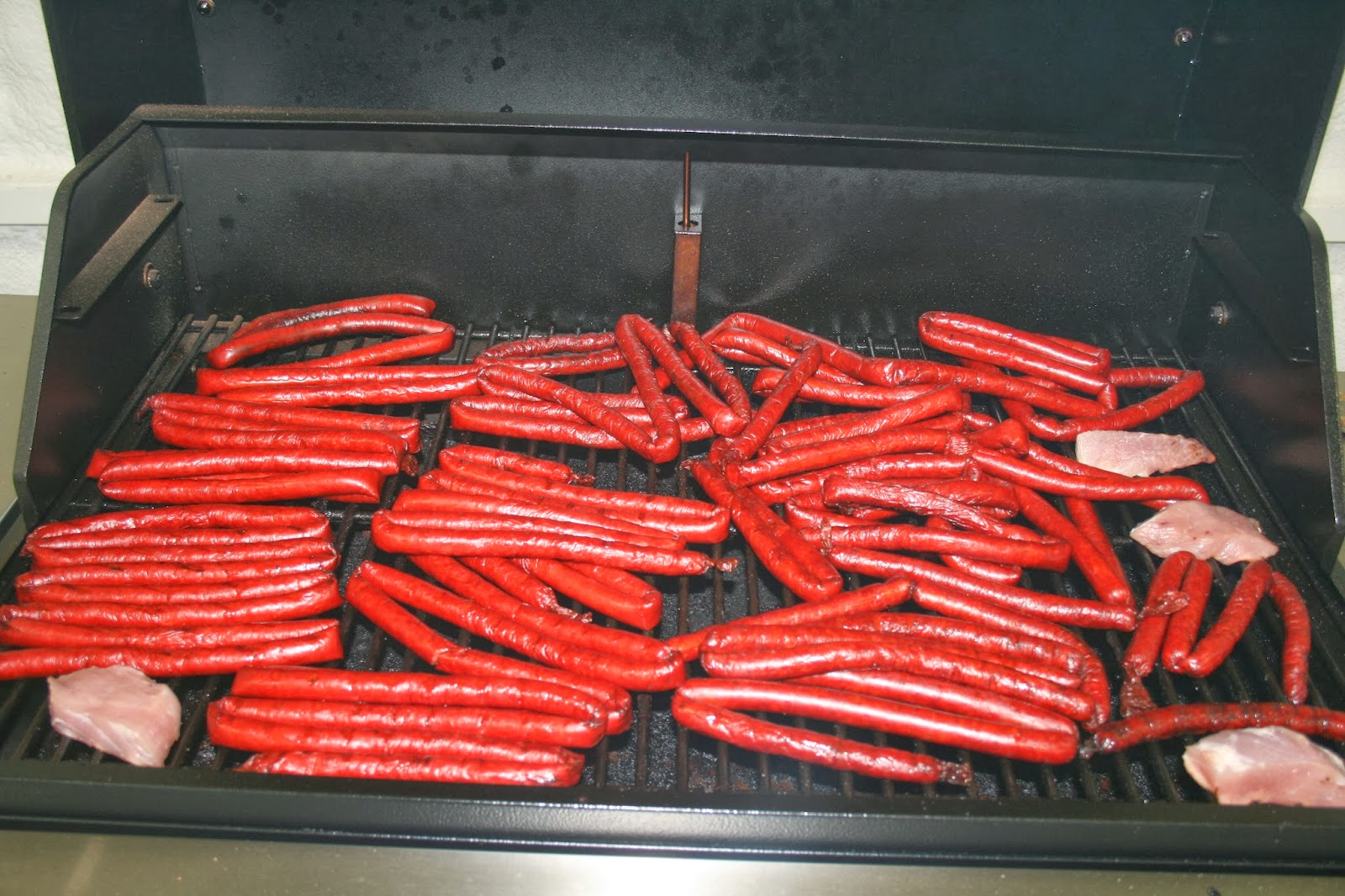 The smoker full of snack sticks and more pork loin. 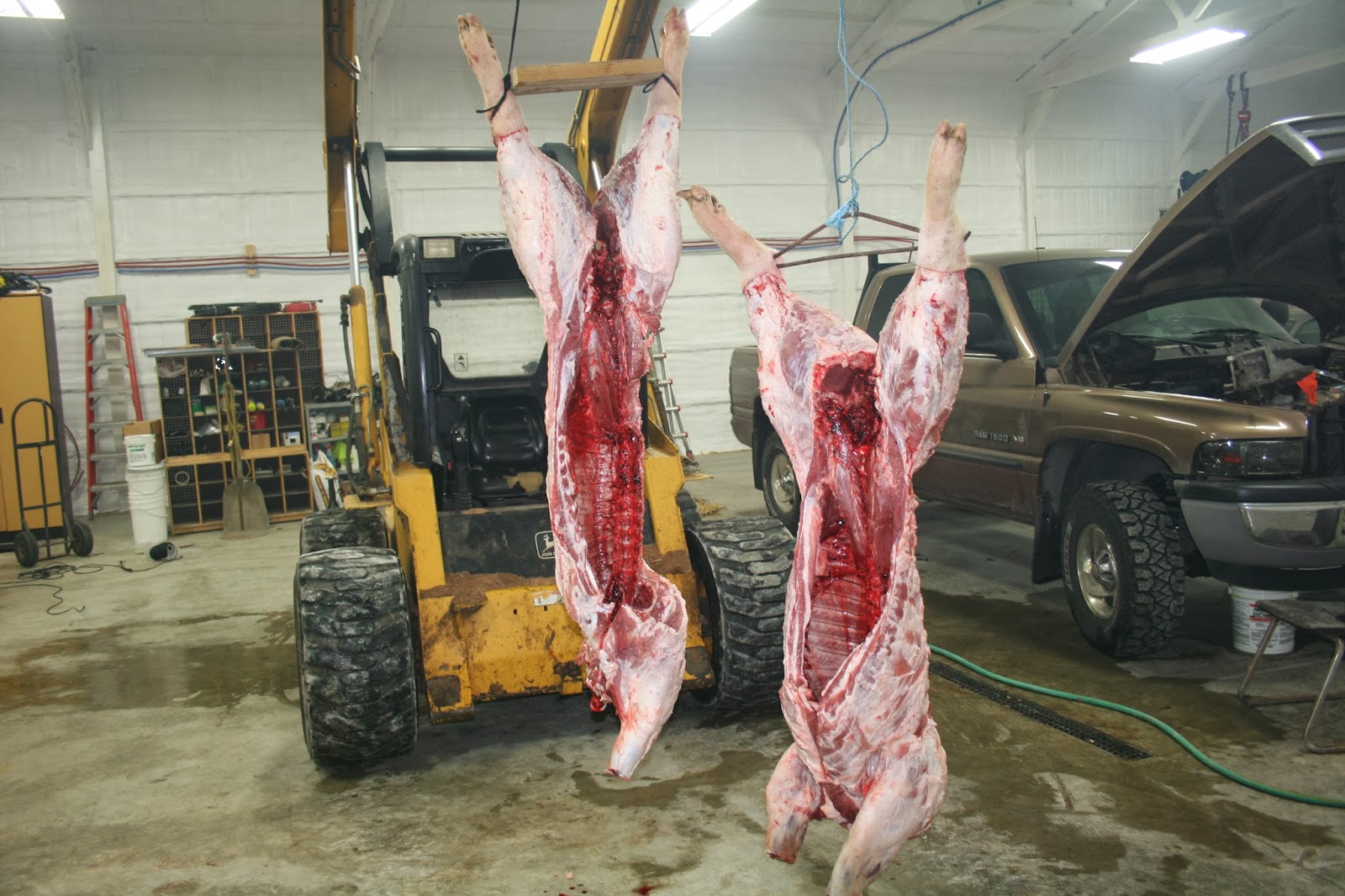 Our 2 lovely hogs for the day :) And Tyler's broken down truck in the back ground :)

That is all the pictures I have to share with me. But in other news, everything is going good around our house. The chickens are still producing their eggs for us. It has slowed down a little with the cold weather but we still get plenty! I think right now I have around 13 dozen in my fridge :) Since we can't get home to check on them we are hoping they are surviving this cold weather we are having. Don't worry, we gave them plenty of food and water and they have a couple heat lamps in the shed with them! We figured on being here without being able to get home so we were prepared.

Blake has been his usual crazy self. He has a few words he says but isn't talking sentences yet. He is getting closer though! He is enjoying all his new toys he got for Christmas very much. He is into Bob the Builder, Thomas the Train and farming right now. He got some of all of this for Christmas so he is set for a while :) He also likes animals a lot. So there is consistently some farm equipment, a train, and an animal in every room. He keeps us busy though and there is never a dull moment with him!!

Tyler has been busy hunting, farming and keeping up with Blake. Hunting season is over now though, but that doesn't mean he has any free time. Blake is very fond of his daddy and doesn't let daddy stand or sit around for more than 20 seconds before he pulls him somewhere. Everything Tyler does Blake would be right beside him if he could!  If Blake knows Daddy is going somewhere he quick runs and gets his boots, coat and his hat so he can go along. We have some rough times when he realizes he can't go along. So Daddy is very popular in our house :)

I have been busy working around the house and at Homestead. Work has been closed since Christmas eve so I have been enjoying my break off. I go back to work on the 21st of January. They open for business this Friday the 10th, but Tyler, Blake and I are going to Myrtle Beach next week :) So I get an extra week off work! My days are numbered there though, I am quitting work at the end of February to stay at home. With baby #2 due April 1st I decided to be off all of March. I do plan to fill in though if they can't find someone else to fill the spot. Speaking of baby #2, we found out its a girl!! So we will be adding some pink things around our house shortly :)

I'm sure I'm missing some news that I could put on here but I am tired of typing :) So that's going to be all for now. Stay warm!!

Michelle
I'm the wife to the best husband ever, Tyler. I'm the mom to the 2 greatest kids in the world, Blake and Brooke! We live in the country and enjoy our farming life!