On January 30th we gave Blake his first haircut. His hair has always been really blonde and never really seemed like he had very much because it was hard to see. It was thin to start out with but by the time we cut it, it was pretty think and a couple inches long :) He had a curl in the back that we didn't want to cut because we thought it was really cute :) But now that we cut it off....looking back it wasn't so cute :)
Here are some pictures of his hair before we cut it! 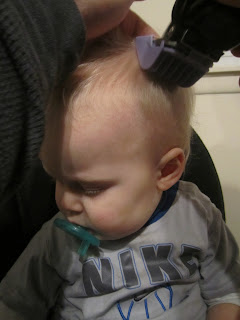 It took us a little while to get used to the short haired Blakey but we like it now. He looks much older than he did before. The curl hasn't came back but that's ok :) I saved it for the scrapbook so if I am ever wanting it back I can look at it remember why we took it off :)
Posted by Michelle at 11:51 AM 1 comment:

On December 26th Tyler shot his 4th deer of the season! It was a really big doe! We decided that we were going to keep her and butcher her ourselves. Once we got her hanging up in the tool shed Tyler came to me and said "It be really cool to butcher a pig when we butchered our doe." Yeah it would be cool but that is a lot of work for 2 people to do!! So we decided to just butcher the doe and keep the pig option open for another year. :)  Tyler and I really like to butcher his deer and make different meat out of them. Last year we made our own patties and each year we thought it would be cool to make a little more. Butchering a pig at the same time would make a lot more options of meat because deer is really lean and adding pig meat/fat to it would make it a lot better. But next year we would try it! :)


So fast forward to New Years Eve....the doe was still hanging in our tool shed and we were going to butcher her the next day.

Tyler calls me to say he is off of work but going to drive by the woods so see if there is any deer out :) This was an almost every day occurrence :) While we were on the phone I get a phone call from my dad. So I told Tyler I would see him when he got home and answered the call from dad. It went something like this:
Dad: "Hi, how are you doing?"
Me: "Good, how are you?"
Dad: "I'm doing good. Um, what would you and Tyler think about butchering a pig tomorrow when you butcher the doe?"
Me:" Uh, yeah that would be cool!"
Dad: "I figured it would be fun and it would be better to mix the deer and pig meat together."
Me:"Yeah Tyler mentioned that last week but we thought it would be too much work for the 2 of us."
Dad:"We would all come over and help you guys and we could just get the pig out of the barn in the morning and do everything at the same time."
Me:"Yeah that sounds good to us!"
Dad:"Do you want to talk to Tyler when he gets home and get back with me?"
Me:"No, he will want to do it, he has been wanting to."
Dad:"Ok sounds good! Thanks!"
Me:"Yep!"

So Tyler gets home and asked what dad wanted. So I tell him and his reaction "Are you serious?!"  He was really excited! :) So we start looking around for supplies and getting out all our big bowls, meat grinder and slicer, sausage stuffer, knifes, seasoning...oh wait, we don't have any! :( Or any meat casings :( Thankfully mom was heading to Lafayette in the morning! She stopped at Gander Mtn and got a bunch of supplies! :)
So New Year's Day rolls around and the hired hand in the barn had the day off so Dad, Josh and Tyler were all going in to do his work in the morning and the plan was to butcher in the afternoon. So while we were eating lunch grandpa pulled in but we just figured he was getting stuff around to haul out corn the next day. Which he was, but what we didn't know was that grandma had came too and that they were planning on helping us butcher :) So when Tyler went out to start butchering the deer grandpa came and helped then everyone else started showing up around 2.

We decided to quarter the deer then take the quarters to the shop (where it was warmer) to take the meat off. So here Tyler and I are holding the deer apart while dad cuts it in half. 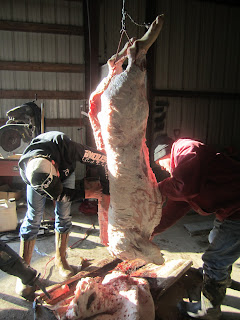 And here is our pig :) I didn't get too many pictures of this part because for most of it I was in the tool shed cutting the deer up :) But they did it the same way and quartered it to bring it to the shop. 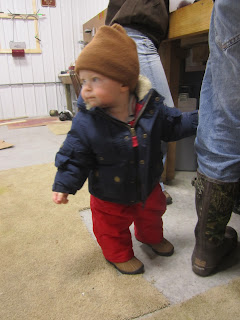 Blakey was in the shop walking around and playing most of the time. He did take a couple naps during the day which was really nice! :) He liked being involved and trying to help :) 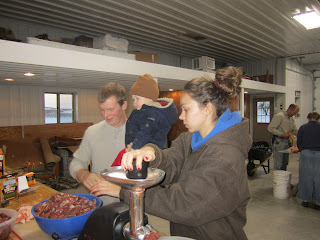 Once we had enough meat cut up we started grinding it. Tyler and I got a grinder for Christmas so it was already being put to good use! Angie is grinding the meat while Tyler and Blake give her the meat chunks to grind. 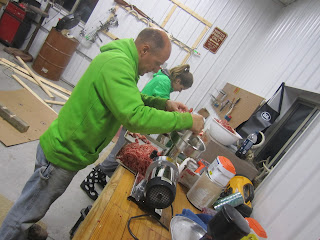 The grinder that Tyler and I got was not keeping up very good at all with how much meat we had. It was going to take us forever to get everything ground then we had to season all the meat and get it made into brats and patties! We were in for a long night! Then dad called a family friend (who happened to be in a tree stand at the time) who had a grinder and he said we could barrow it for the night if we gave him some meat! :) His was much bigger and a lot faster! It really sped up the process :) Once we had enough ground to make a batch of meat we would measure it out and season it then start making patties or brats.

Since no body really planned anything since we didn't have much time to plan :) For supper I said something to Tyler about ordering pizza. Silly me!! We are butchering 2 animals.... we are going to have fresh pork chops on the grill!! :) So I went in the house got some seasoning, cleaned out the fridge and pantry and took stuff out for supper :) They were some of the best chops I have ever had! :)

Grandpa and Grandma brought some of their meat processing supplies with them from when they used to butcher animals. It came in really handy! After I took Blake to bed I came back out to the shop to find this.....a really long strand of brat! :) 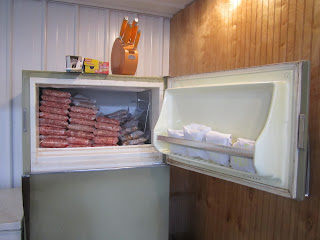 Here is just some of the meat we got :) We made about 6 different kinds of patties and maybe 3 different kinds of brats. We also got a bunch of ground pork! And there is still some in the freezer that we still have to make into snack sticks! We had a ton of fun doing everything and are already planning for next year! :) When walmart was having their after Christmas sales they had their plastic bowls for $.24!! So we got about 20 of them for next year to put meat in! :) We are also going to get a bigger meat grinder and be more prepared with everything :) But overall we did pretty good for getting a deer and a pig butchered and made into meat in 8 hours with hardly any preparation! :) A big thank you to Mom, Dad (also for donating the pig:)), Laura, Angie, Josh, Jenn, Grandpa and Grandma for helping and making the day so fun!!   We are looking forward to next year already! :)

Oh....stay tuned for a blog update on Blake's first haircut!!
Posted by Michelle at 9:22 AM 2 comments:

Michelle
I'm the wife to the best husband ever, Tyler. I'm the mom to the 2 greatest kids in the world, Blake and Brooke! We live in the country and enjoy our farming life!